Click below to grab your FREE 3 x 50% off Lalamove Coupons today!

Can’t get enough of Earl Grey Tea? Gong Cha is having a promotion offering 50% off its exclusive Earl Grey with purchase.

Promotion is limited to 1 redemption per person.

Gong Cha is having a promotion offering an afternoon perk-me-up with Gong cha’s iced coffee at an exclusive promotional price of $2.50 only!
Promotion is only available at selected stores:
–Singpost
–One Raffles Place
–Mapletree Business City
–NEX
–Causeway Point
–Tan Tock Seng Hospital
Promo is available till an unspecified period.
Check out our coverage on Gong Cha Menu or find the nearest Gong Cha Outlets.

Treat yourself this weekend with Gong Cha newly launched Creme Brûlée series! Gong Cha is offering 50 Cents upsize promo for the new drink series.
Promotion is applicable via cashier orders only and available from 18/09 to 30/09. While stocks last.

Gong Cha Takashimaya is having a promotion offering 1-FOR-1 Brown Sugar Fresh Milk with Pearls (Large Cup) from now till 12 September 2021.

Each customer is limited to 2 redemption in this promotion.

Gong Cha Promotion: 1 for 1 Selected Drinks Each Day Till 5 Sep

Each day, there will a different 1 for 1 deals as follows: 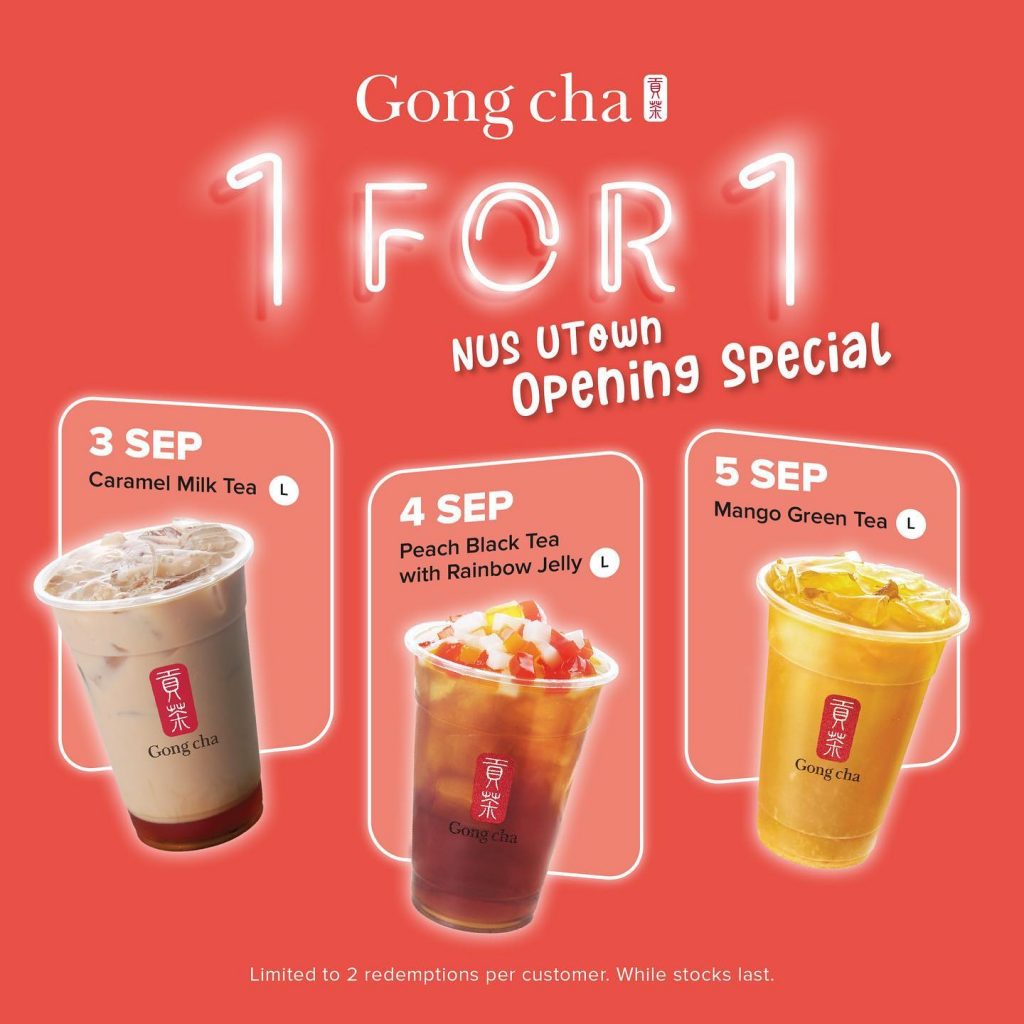 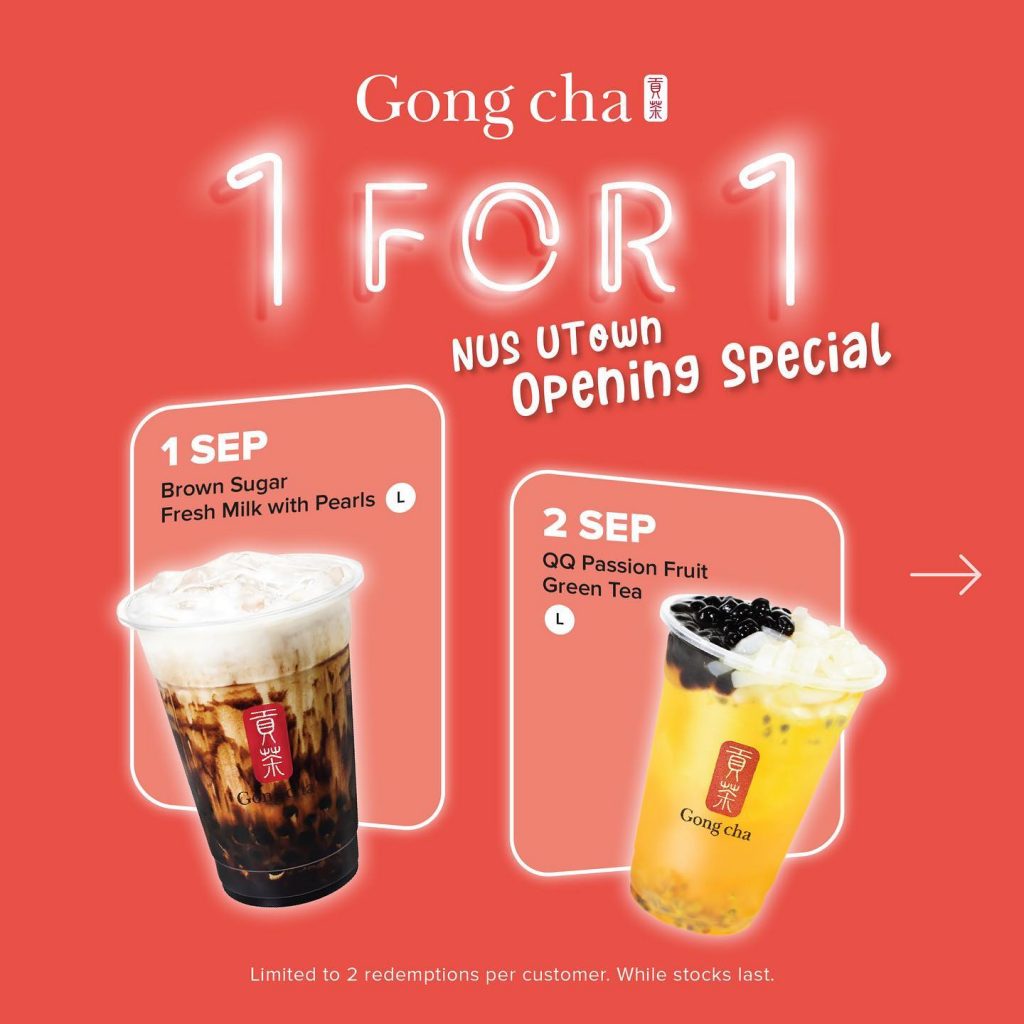 Check out our coverage on Gong Cha menu to see the latest menu in Singapore.

Promotion is Llmited to 2 redemptions per customer only. Get one now, and share the other with your best bbt buddy!

Note that this promotion is not available at Gong Cha NUS Frontier outlet.

Check out our coverage on Gong Cha Menu to see the latest menu.

To start off the week, Gong Cha is having a new promotion offering 1-for-1 Brown Sugar Fresh Milk with Pearls from today till Wed.
Note that the promotion is valid for large cups only, and limited to 2 redemptions per customer.
Get yours now while stocks last.
Promotion is available at all outlets except NUS Science Canteen Frontier, SMU, SUTD, Changi Hospital and Tan Tock Seng Hospital.

Gong Cha announced another promotion offering 50% off Black Tea with Rainbow Jelly for all vaccinated customers!
Simply flash your vaccinated status on your TraceTogether app to enjoy this deal.
Promotion is limited to 1 redemption per pax only and available in all outlets except SUTD , SMU & Enabling Village outlets.
Check out our coverage to view the latest Gong Cha Menu.

To support the current national vaccination drive, Gong Cha is having an exclusive promotion offering 50% Green Tea White Pearl for those who are fully vaccinated.

Simply present fully vaccinated status on TraceTogether app to redeem the offer. Promotion is limited to 1 cup per customer per redemption.

Promotion is available till 18 August. Get your vaccine done and grab a discounted BBT now!

Gong Cha is having a new 1 for 1 promotion this weekend offering 1 for 1 Gong cha Brown Sugar Fresh Milk with Pearls from 16-18 July!
Promotion is valid for Large cup only, and limited to 1 redemption per customer. While stocks last!
Deal is available at all outlets except NUS Science Canteen Frontier, SMU, SUTD, Takashimaya Food Hall, Changi Hospital and Tan Tock Seng Hospital.
Great BBT Deal to check out this weekend!

Note that promotion is valid during the Shopee Boba Festival from 28 to 30 April 2021.

Enjoy your favourite drinks from brands such as Gong Cha, Milksha, The Alley, and more! Yan Xi Tang Jasmine Pearl Milk Tea (Medium). It is a great deals for your next bubble tea purchase!

Gong Cha is having a promotion offering $1 (U.P $3.30) Hot Milk Tea during rainy days!  Promotion is available at all outlets on rainy days till an unspecified period. Check out our coverage on Gong Cha Menu to choose your Gong Cha drinks!

Gong Cha will be having a promotion this weekend to thank all their customers and BTF fans by offering 1 OFF for all Gong cha Heegan Dazs Bubble Tea Float till 15 Nov. Promotion is available at all outlets.

Satisfy your bubble tea cravings with a loved one when you purchase this 1-for-1 Earl Grey Milk Tea with 3J offer from Gong Cha. This best-selling drink combines Gong Cha’s signature Earl Grey Milk Tea with 3 different types of chewy toppings – pudding jelly, grass jelly and the classic black tapioca pearls. Available at multiple Gong Cha outlets across Singapore, this 1-for-1 bubble tea promotion is exclusively available on ChopeDeals!

The essence of Gong Cha, or Tribute Tea, originated from the provision of the most premium and refined teas to the Emperor of China. It represents the highest quality and expectations beverages. Established in Taiwan in 2006, Gong Cha has become deeply appreciated by its customers, gaining global renown by word of mouth and a uniquely customised service.

From 7 October onwards, members can redeem a Gong Cha Pearl Milk Tea or Plum Green Tea (Medium-sized) at only $1!

Limited to the 1st 5,000 redemptions at selected Gong Cha stores. Valid on a first-come, first-served basis, while stocks last.

How to redeem this Gong Cha Promotion:

Promotion is redeemable at the following Gong Cha stores:

Check out our coverage on National Day Promotion if you are looking for more NDP related deals. Also, check out our guide to Gong Cha menu to help you decide which drinks to buy in your next trip to Gong Cha!

Together, let’s add more cheers to the National Day weekend with bbt goodies!

Related: If you are looking for the latest McDonald’s promotion and menu update, visit and bookmark our guide to McDonald’s Singapore Promo Guide and Menu for October 2021.

Hope you enjoy this Gong Cha Promotion: 50% off Earl Grey Coconut Slush with Purchase brought to you by AllSGPromo.com.

Related: You might also be interested in our KFC Singapore Promo Guide and Menu for October 2021, Our Guide to KOI Menu 2021 and LiHo Menu

Fancy a staycation since Phase 2 has opened, check out our complete guide to Staycation Promotion in Singapore October 2021.

If you enjoy our content, please LIKE us on Facebook, Instagram or join our Telegram Group to receive daily updates on the latest and best SG promos and deals! Visit our homepage for the latest Singapore Promotions and deals.

IKEA Promotion: Up to 50% off Furniture, Food Discount, Free Tote...