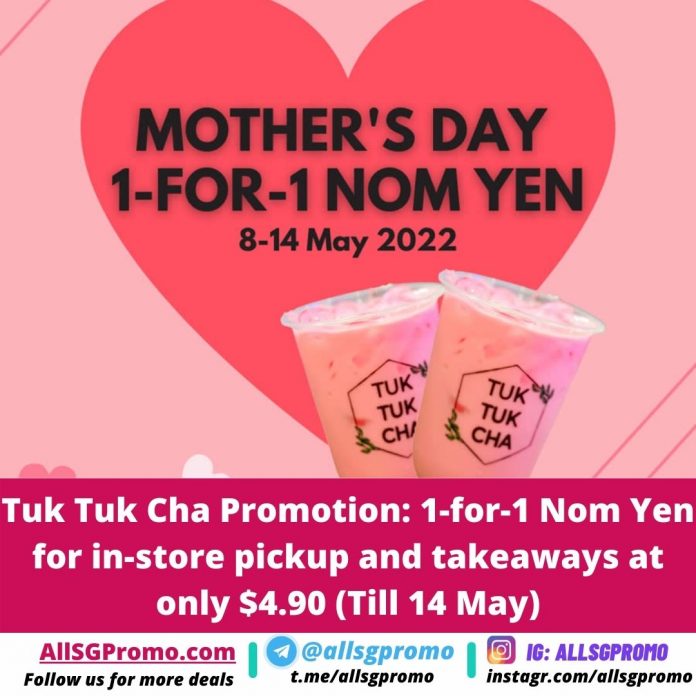 It’s Mother’s Day soon! Treat your mum to a sweet, lovely drink. Tuk Tuk Cha is having a special promotion offering 1-for-1 Nom Yen for only $4.90. 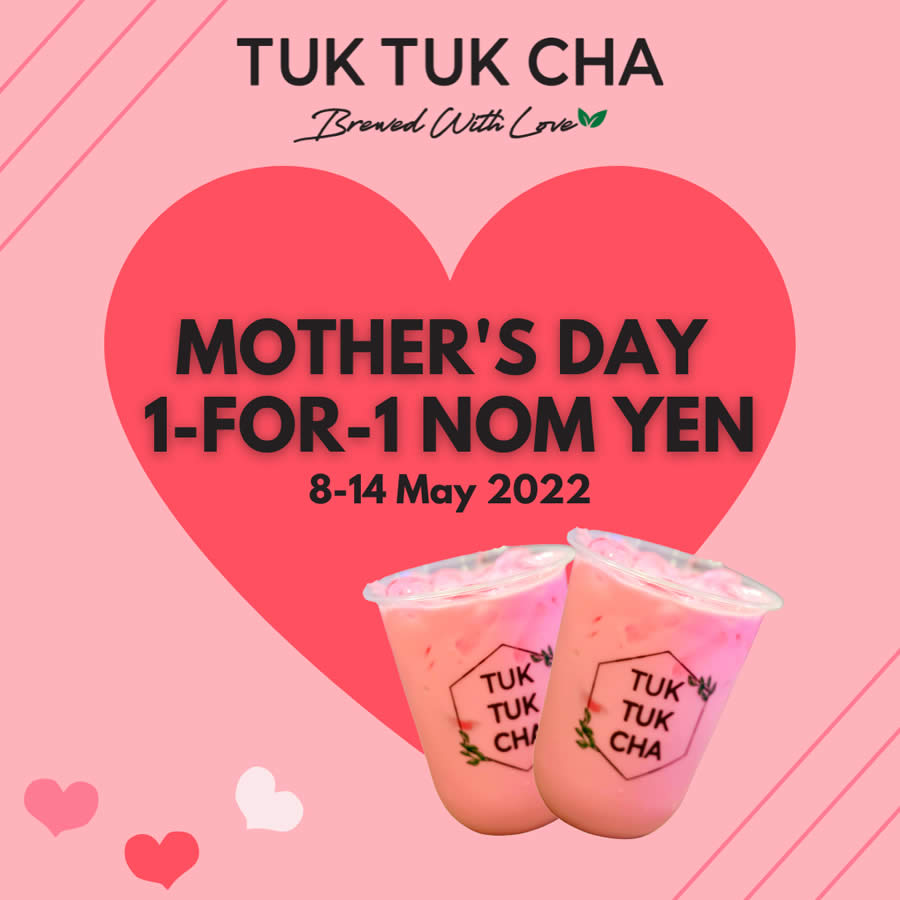 Promo is available from 8 till 14 May. Only available for in-store pickup and takeaways. Nom Yen Drink.

Where are my Easties at?! Great news for you! Tuk Tuk Cha is having a fantastic promotion offering 1-for-1 Thai Milk Tea or Thai Green Milk Tea at E!Hub!

Promotion is available only at 1 Pasir Ris Close, Singapore 519599

Promo is available from 24 March till 30 April. In-store walk-ins only. Not in conjunction with any other promotions, discounts, or privileges. Available in Large only. 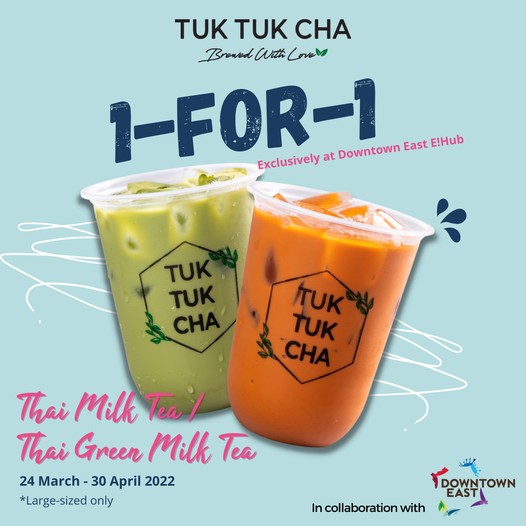 Tuk Tuk Cha is celebrating its new outlet opening at Downtown East with an exclusive promotion offering $1 Thai Milk Tea (Original or Green) to all customers with any purchase at the Downtown East outlet.

Promotion is available from now till 30th September. Limited to one redemption per person, while stocks last! 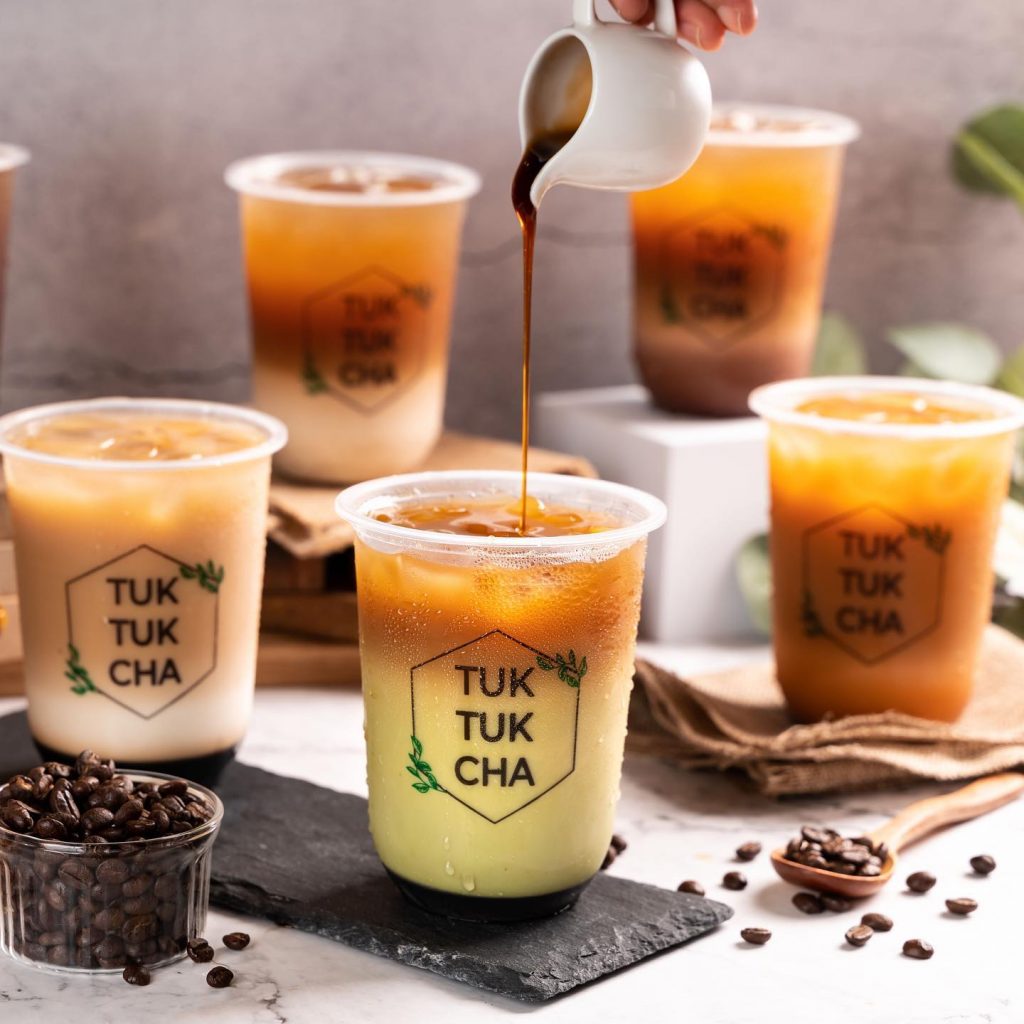 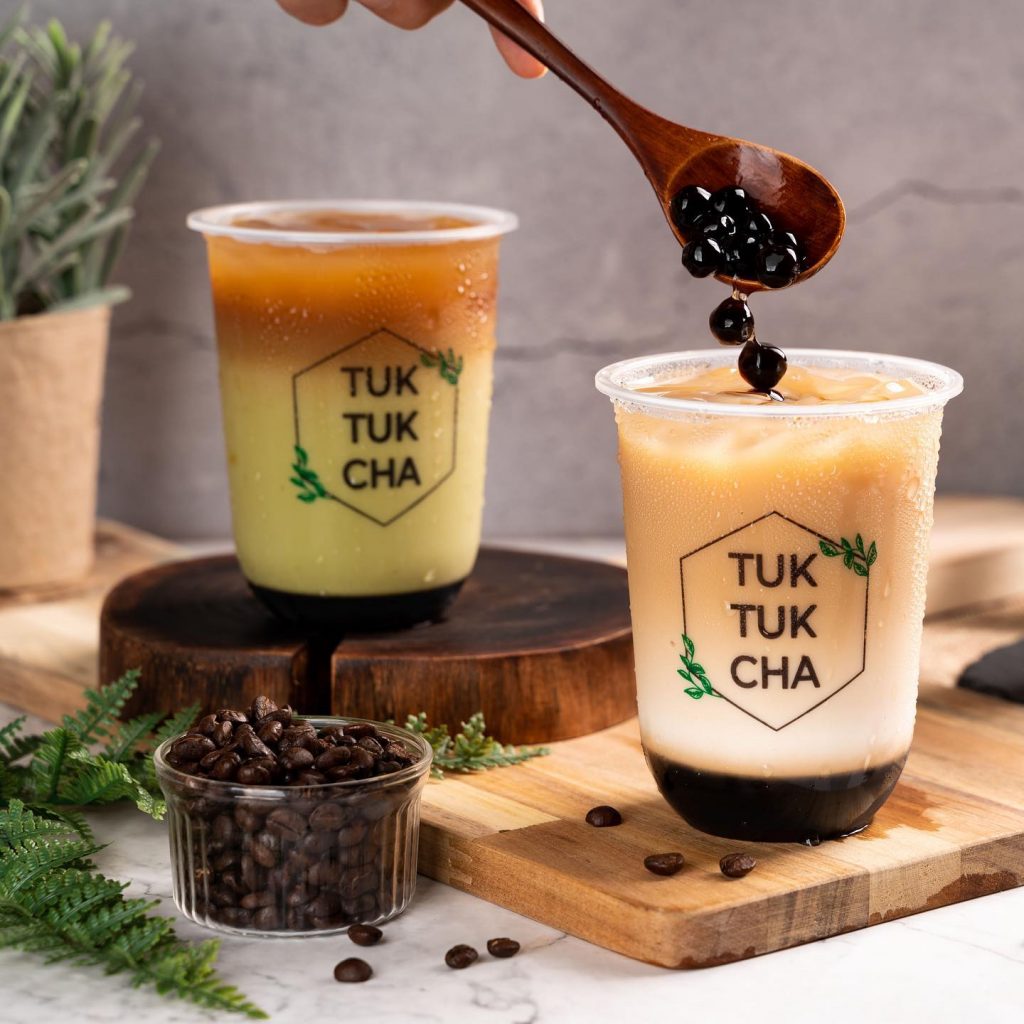 The 1-FOR-1 promotion is exclusively for in-store purchase. Limited to 1 redemption per person.
Promotion is available from now till 31st Aug 2021. Also available on GrabFood, Foodpanda, Deliveroo, GooglePay and Foodline.

If you’ve been missing your favourite Thai snacks, now’s your chance to satisfy your cravings!

Enjoy a $1 set from Tuk Tuk Cha, which includes a large Thai Milk Tea, plus Golden Toast (U.P. $9.10), that is served with either kaya or milo condensed milk dip.

Valid for redemption via UPGREAT, from now till 11 Sep 2021, while stocks last.

Tuk Tuk Cha is having another great promotion offering 1 for 1 Thai Basil Chicken Rice to satisfy your Thai Food Cravings.

Grab a friend and feast on our delightfully aromatic Thai Basil Chicken Rice. Served with a perfectly fried egg, a generous portion of chicken and freshly steamed white jasmine rice.
Promotion is only available at 3 Tuk Tuk Cha outlets below:
–NEX #02-12
–Bedok Point #02-32/34
–Hillion Mall #01-03/04
Promotion only limited to 1 redemption per receipt.

Tuk Tuk Cha is having a reopening promotion offering 1 for 1 Signature Thai Milk Tea at all its outlets!
See below for details of the promotion.
REOPENING 1-FOR-1
Period: 21 June- 25 June 2021
Promo: Get 2 Signature Thai teas at a price of 1

Do not miss this exclusive promotion and head down to our outlets now!
– Promotion is only available with any purchase
– Promotion only limited to 1 redemption per customer
Promotion available on Foodpanda & Deliveroo! Pick-up is also available at these locations: https://tuktukcha.com/location/

Tuk Tuk Cha is having a promotion offering 1 for 1 Regular Thai Milk Tea at 3 of its outlets!

See below for details of the promotion!

1-FOR-1 Thai Milk Tea
Promotion period: 1 June- 4 June 2021
Get your 1-for-1 Thai Milk Tea at these exclusive outlets:
Tuk Tuk Cha Paya Lebar Quarter #01-K4
Tuk Tuk Cha Harbourfront Centre #02-01/02
Tuk Tuk Cha Bugis Junction #M01-K1
Note that promotion is only available for regular Thai Milk Tea at the mentioned outlets. Promotion is limited to 100 redemptions per mentioned outlet.
Follow our Telegram and Instagram for the latest money saving deals.
Great 1 for 1 deal to satisfy your milk tea craving! Check out our coverage on 1 for 1 Promotion in Singapore for more 1 for 1 deals.

To celebrate its new outlet opening at Alexandra Central, Tuk Tuk Cha is back with another 1 for 1 promotion this January!

Treat yourself to 1-for-1 Signature Thai Milk Tea. Promotion is available from 29 January – 31 January 2021.
Redemption of the promo is limited to 2 orders per customer.

Head over to Tuk Tuk Cha @ Alexandra Central to satisfy your thai milk tea craving with this opening special promo!

Check out our full coverage of this Tuk Tuk Cha 1 for 1 promotion for details.

*Valid e-voucher must be presented at our stores to enjoy the offer.
*Once claimed, redemption period is valid till 10 Dec 2020.

Another Tuk Tuk Cha Promotion for fans of the popular Thai Milk tea chain! Friends of Tuk Tuk Cha residing in the North can now rejoice!

This time, Tuk Tuk Cha is having a new deal offering its Signature Tuk Tuk Cha Thai Milk Tea at only $1 when you spend at Shell Select.

Promotion is available till 25th October 2020 and limited to 2 redemptions per receipt. Not applicable for purchase of tobaccos & service item.

The outlet is Tuk Tuk Cha first kiosk concept.  Featuring a more concise menu of our signature individual mains like Tom Yum Noodles, Thai Beef Noodles and Thai Guay Jub, coupled with their best selling beverages like Thai Milk Tea, Thai Green Milk Tea and Butterfly Pea which are bound to satiate your appetite.
As this is a takeaway kiosk concept, dessert offerings such as Golden & Shibuya Toast will not be available from this outlet.

Promotion is available from 7 September – 13 September 2020.

Grab a friend and head down to Tuk Tuk Cha for a day of good food and great savings!

Need some sweet treats for the school holidays?

Available from 7 September to 13 September, while stock last.

To celebrate the new opening of two new outlets at Paya Lebar Quarter & Clementi Mall, Tuk Tuk Cha is offering exclusive 1 for 1 promotions exclusively at these outlets in the month of July till 4 August.

With these new openings, a series of Opening Specials and perks have been lined up for customers as below:

The deal is valid for both Dine-in and Takeaway. Mark your calendar this July and visit Tuk Tuk Cha for a wonderful serving of Thai Milk tea and noodles at value prices.

Out of the three deals, we think the best value for money is the 1 for 1 Set Meal promotion for Tom Yum Noodles & Thai Milk Tea starting on the 15th July. A complete buddy meal for two if you can get your friends along to visit the outlet.

This is a brand new Tuk Tuk Cha in the east, conveniently located at Paya Lebar Quarter (PLQ) open area next to Paya Lebar Mrt station, slated to open by end of this week.

Hope you enjoy this Tuk Tuk Cha Promotion: 1-for-1 Nom Yen for in-store pickup and takeaways at only $4.90 (Till 14 May) brought to you by AllSGPromo.com.

Related: You might also be interested in our KFC Singapore Promo Guide and Menu for May 2022, Our Guide to KOI Menu 2022.

Fancy a staycation since Phase 2 has opened, check out our complete guide to Staycation Promotion in Singapore May 2022.

Starbucks Promotion: 1-for-1 Venti Frappuccino at Outlets, 1-for-1 Selected Drinks when...

moomoo Promotion: Redeem up to 1 FREE Tesla Stock & Up...