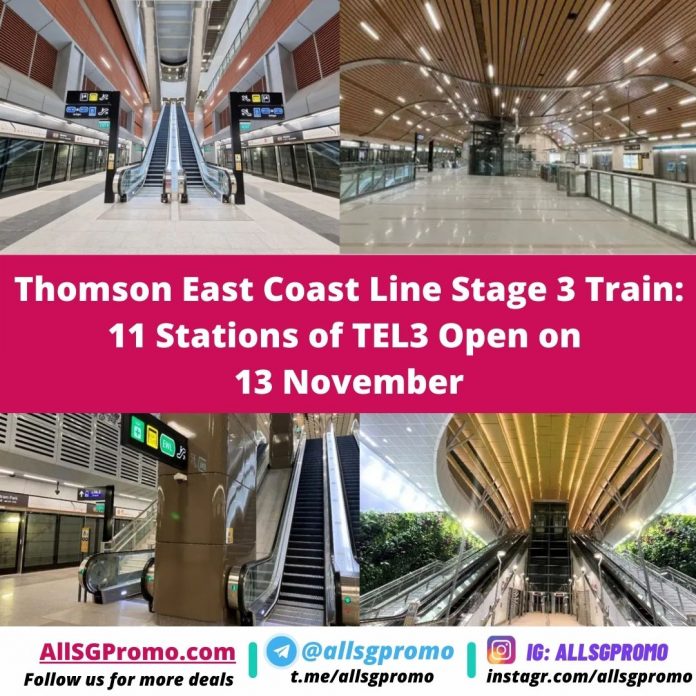 Residents and commuters along the 13.2km rail line of the Thomson-East Coast Line Stage 3 (TEL3) will be able to travel comfortably starting 13 November!

More than 180,000 households that will be within a 10-minute walk of existing TEL stations, including Woodlands North to Gardens by the Bay, will benefit from the 11 TEL3 stations when they formally open on November 13 (Sun).

Take a look inside the new stations.

Stevens Station- A short distance from Bukit Timah Road lies Stevens Station. As a result of the station, nearby residential communities and educational institutions, notably Singapore Chinese Girls’ School, would have better connectivity. Napier Station- The Singapore Botanic Garden, Gleneagles Hospital, and the Australian High Commission are just a few of the famous buildings surrounding Napier Station, which is located at the intersection of Cluny and Napier Road. Orchard Station- An interchange station, Orchard Station links passengers on TEL to NSL. It will enhance connection for commuters going to and from the heartlands and the shopping district because it is situated within the city’s primary shopping belt. Great World Station- Residential communities may be found on each side of Great World Station along River Valley Road and Kim Seng Road. A previously unconnected area, which contains schools and commercial enterprises like Great World City, will now have rail access thanks to the station. Outram Park Station- One of TEL’s three-line interchanges is Outram Park Station. It connects to the current interchange station, connecting the TEL, EWL, and NEL. Additionally, the station has special signage directing travelers to the exits designated for the Singapore General Hospital. Maxwell Station- Maxwell Station is located next to the Maxwell Food Centre and across from the Buddha Tooth Relic Temple, along South Bridge Road and Neil Road. The following are also included during the opening event’s Rail Day Out (Free Rides and Activities) on November 11, Friday:

Join the tens of thousands who use our Telegram channel to instantly receive updates on the newest neighborhood offers and news like this.