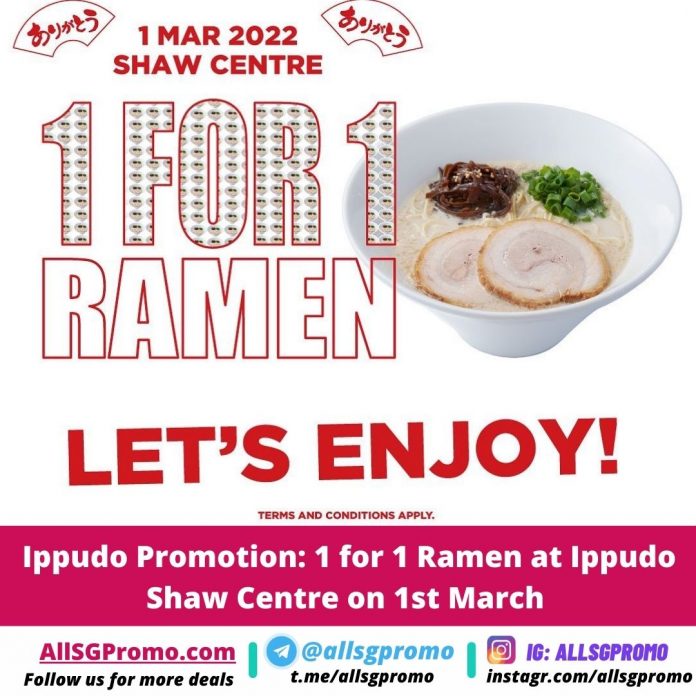 The popular Ippudo Ramen is celebrating its IPPUDO Shaw Centre’s 7th Anniversary on 1 March 2022 by offering 1-FOR-1 RAMEN promotion for the entire day!
Promotion is available at Ippudo outlets at IPPUDO Shaw Centre (#04-22/23).
Terms & Conditions:
– 1-For-1 Ramen promotion is only valid for dine-in and on a first-come first-served, while stocks last basis. Free ramen will be based on the lower value item(s) ordered. Other terms and conditions apply.
– Important Note: Only ramen will be available at IPPUDO Shaw Centre on 1 March 2022. Other menu items will not be available on that day.

Ippudo Promotion: 2 Ramen Anniversary Set Meals with Sides and Drinks for only $36

Never tried Ippudo Ramen before, now is your chance to give it a try with this promotion!
In commemoration of 36 awesome years, Ippudo Ramen is having a promotion $36 Anniversary Set Meal for Two!
Each set comes with:
– 2 Global Signature ramen: Shiromaru /Akamaru /Karaka-men,
– 2 sides: IPPUDO boiled gyoza and chicken karaage,
– 2 drinks: coke, coke lite and sprite
Promotion is valid from 1 – 31 October 2021. Available for dine-in, takeaway and delivery at all IPPUDO stores.
Check out what Ippudo has to offer below:

Ippudo is having another 1 for 1 Ra,em promotion exclusively on 19th July at its Ippudo Tanjong Pagar outlet.

Address: IPPUDO Tanjong Pagar #01-15 Guoco Tower
T&Cs: 1-For-1 Ramen. First-come first-served basis, while stocks last. Other terms and conditions apply. Note: Only Ramen will be available on the menu on 19 July.
The promotion is applicable for all ramen. Complimentary ramen will be of equal or lower value.

To celebrate IPPUDO Shaw Centre’s Anniversary on 1st March, Ippudo Ramen is offering a new 1-for-1 IPPUDO ramen promotion. To redeem the promo, simply like and follow Ippudo Ramen Facebook.

Promotion is valid for one day only and exclusively for dine-in.

Ippudo Promotion: 1 for 1 Ramen Promotion at All Outlets (October 2020)

Ippudo is having an one-day flash promotion offering 1 for 1 Ramen promo across all outlets on coming Friday, 16th October 2020.
This Ippudo promotion is to celebrate 35 years of IPPUDO with 1-for-1 ramen at Ippudo dining outlets below:
IPPUDO Mandarin Gallery⁣
IPPUDO Tanjong Pagar⁣
IPPUDO Mohamed Sultan⁣
IPPUDO Westgate⁣
IPPUDO Shaw Centre⁣
IPPUDO Marina Bay Sands⁣
IPPUDO The Star Vista⁣
IPPUDO Raffles City⁣
⁣
This promotion is available for dine-in only and for the entire day tomorrow. Great ramen deal to catch especially since it is on a Friday and available at all timings and Ippudo outlets!

As part of its 10th Birthday celebration at its Mohamed Sultan outlet, ⁣Ippudo Ramen is offering a FREE bowl of the exclusive ? Tao Kuro Ramen ? with any ramen order at Mohamed Sultan outlet on 15 August (Saturday).
⁣
“Served 10 years ago when the outlet was originally known as “IPPUDO x Tao”, the exclusive Tao Kuro Ramen features thick chewy noodles in shoyu pork-bone broth, topped with IPPUDO’s signature pork belly, black fungus and a special miso paste. Its taste is heavier and richer compared with IPPUDO’s other ramen offerings.”
⁣
On top of the free ramen, all diners will also receive a Kuro Ramen voucher which will entitle customers to a bowl of Kuro ramen for just S$10 on their next purchase.

Hope you enjoy this Ippudo Promotion: 1 for 1 Ramen at Ippudo Shaw Centre on 1st March  brought to you by AllSGPromo.com. Check out our homepage for the latest Singapore Promotions.

Related: You might also be interested in our KFC Singapore Promo Guide and Menu for August 2022, Our Guide to KOI Menu 2022.

Fancy a staycation since Phase 2 has opened, check out our complete guide to Staycation Promotion in Singapore August 2022.

Watsons Promotion: 50% off Selected Products when you purchase 2 products...

moomoo Promotion: Redeem up to 1 FREE Amazon Stock & Up...

NEVER MISS A DEAL AGAIN!
Subscribe to AllSGPromo.com to receive the best deals, promo codes and discounts in SG